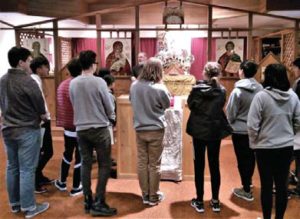 As part of a one-month survey of Christian history from New Testament times to the present, our class went on a field trip to become more familiar with two important (but less well-known to us) branches of the wider Christian family, Roman Catholicism and Eastern Orthodoxy. We spent a bit of time at Westminster Abbey in Mission, where we were given a talk on the life in a monastery. A tour of the main place of worship wa 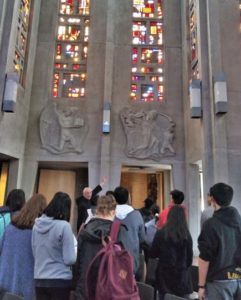 s followed by attendance at a short midday service. The second church we visited was an English-language Orthodox Church in Langley, where we had a thorough introduction to the way Orthodox believers approach God in worship.While many customs in each church, such as crossing oneself or the use of incense, were strange to most students, we all felt warmly welcomed in each place, and left with a better sense of the things in which we differ from other Christians, but also a deeper appreciation of what we have in common.

I thought Macbeth was a brilliant spectacle! There was a certain human charm in personally witnessing the actors’ emotions before you than over a screen. From the haunted nights of witches’ cackles to daring swordplay in castle storms, the Bard on the Beach company had whisked my breath away and stirred my heart to the edge of my seat.